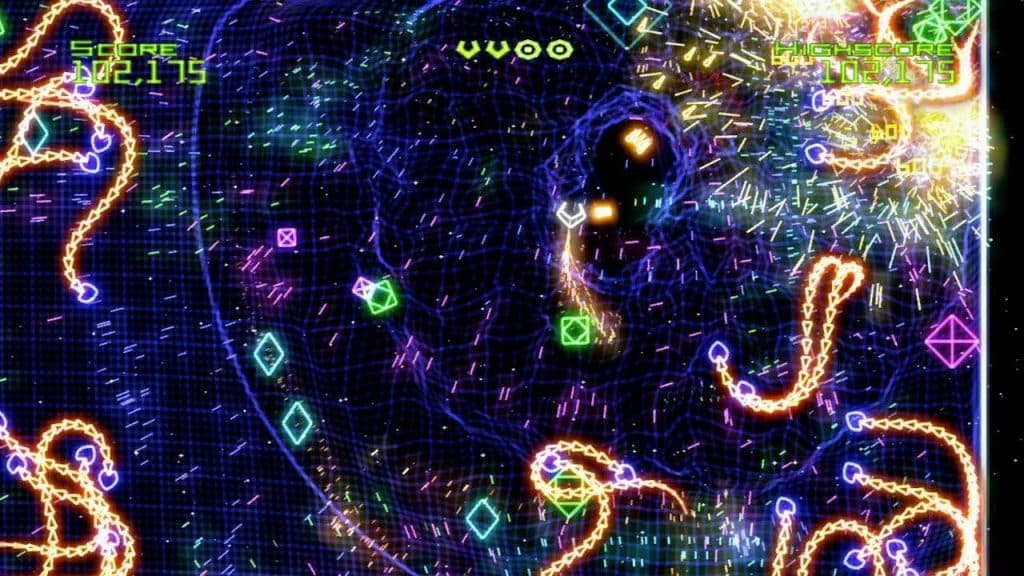 Geometry Wars is a fun and addicting arcade shooter that has been around for many years.

In Geometry Wars, you control a spaceship to defend against endless waves of attacking enemies. You have to stay alive as long as you can and make a decent high score in the colorful 2D planes.

Early in the series, or to be exact, when Geometry Wars was an easter egg for Project Gotham Racing 2, it was simplistic and fun.

It was technically a mini-game, which gave birth to the first standalone game in its series, Geometry Wars: Retro Evolved.

So here is our Geometry Wars review of the first standalone game in the series.

The 2D shoot-em-up game gets livelier and begins to feel like an actual game. One of the most notable improvements in the game was its vibrant neon colors — making the game a lot livelier than before.

Moreover, due to technical advancements after the first easter egg game, you will be able to spot 3D bits in it. The best example of 3D parts in the game is the ripple formed across the 2D plane along the Z-Axis when you respawn.

Many new additions to the enemy types always keep you on the edge. You have to make quick decisions and think up the best strategies, which often do not work due to the ever-changing environment and spawning enemies.

However, hordes of enemies felt more natural; the addition of a balanced enemy spawn system made it so that the combat was fun and not blatant.

There are two modes in the game: Classic Mode and Waves mode.

In classic mode, players must defeat all enemy waves before proceeding to the next level. The goal of this mode is to survive as long as possible without losing all lives or getting hit by an enemy too many times.

On the other hand, the Waves mode pits players against more than 50 levels with various objectives such as defeating specific targets or reaching checkpoints within a certain time limit. You start off without bombs and need to go as far as possible with one life.

3X Larger Battlefield To Fight In

The hordes of enemies were not the only part that got tweaked. The complete battlefield has changed, with the combat area now at least 3 times larger.

Hence, you have more space to engage in combat. More room does translate into higher scores than before but it also means late-game waves and levels are a lot harder than before.

Addition of Enemies and Weapon Upgrades

There’s a serious number of different enemies in the game. The most intriguing enemy we faced was snake-like, but it wasn’t the deadliest one.

However, the developers were also generous enough to add many weapon upgrades, which are a tremendous help. From riding enemies with fast-moving single bullets or shooting a couple of slow bullets, whatever you have, just make sure to aim right and keep at it.

I’ve been playing the Geometry Wars series for some time now, and it never fails to get my heart racing. The game is a delightfully challenging time-waster that I find myself coming back to again and again when I need a quick adrenaline rush.

After over 10 years, this classic still holds up beautifully as one of the most iconic arcade games in history.