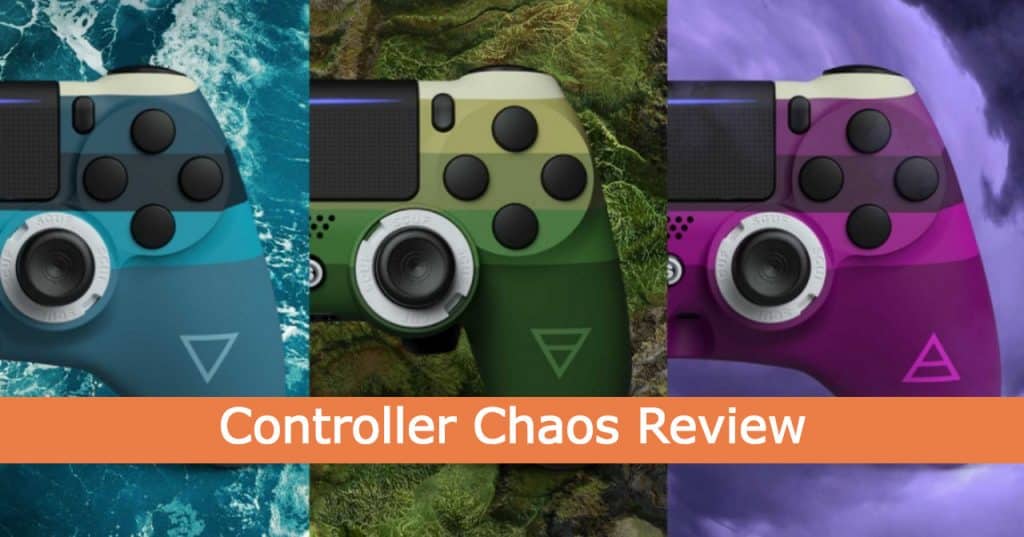 If you’ve been shopping around for a custom controller you’ve probably come across Controller Chaos. They are one of the biggest sellers of modded controllers out there right now.

The problem with modded controllers is they can feel a little sketchy. They tend to cost a lot of money but promise the world in regards to performance. They feel like they should be sold down a dark alley somewhere.

So are they worth it and should you take the risk? I’m going to run through Controller Chaos review- the most popular options we have right now to help you decide.

However today we’re looking at their most recent and popular options. The PS4 and Xbox One controllers.

That’s right, they currently do not offer modified versions of the Series X or Dualsense. Although these are on their way.

Since the options for both controllers are the same, we’ll be talking about them together.

The way these mods work is pretty simple. Controller Chaos just installs an extra chip in your controller of choice. From there it’s just a case of paying for the mods you want.

The initial rapid-fire chip costs around $40. After that, each mod is $10 unless you opt for the $50 Master mod.

So what are the benefits of a modded Chaos Controller?

Unfortunately, it’s not all sunshine and rainbows here. There are a few downsides we need to talk about.

Arguably the biggest downside to these controllers is the fact that all the performance mods are hardware-based.

You’re paying quite a lot of money for what is essentially a set of hacks or cheats. They might be undetectable now but who knows about the long term?

For less money, you could get yourself an Xbox Elite 2 with all its features that actually help to make you a better gamer, instead of relying on cheats.

Besides all those naughty hardware mods Controller Chaos offers a good choice of cosmetic options.

In this section, we’re mainly going to be talking about the Series X, Dual Sense, Xbox and Switch controllers as these don’t support the hardware mods.

However, the PS4 Dualshock and Series One controllers feature the same levels of customizability.

Over the last few months, I seem to have designed A LOT of controllers and I have to say Controller Chaos’s tool is one of the simplest and easiest to use.

Your controller of choice is broken down into pieces and you can choose a different look for each piece.

As you can see below the Dualsense has loads of options. There literally isn’t a visible part of the controller you can’t change.

This means your controller can go from  looking like this:

I didn’t choose all the most expensive options for this design but it’ll set you back just south of $160. Beauty is in the eye of the beholder so you decide if it’s worth it or not.

Also, check out some of the best custom ps5 controllers here.

The series X also has plenty of options, one more than the Dualsense. This means you can really go crazy.

Once again I didn’t add every cosmetic option here to try and give a more realistic price. This option comes in at just under $180. Didn’t like it?

You may check out the custom Xbox controllers here to find an alternative.

The Joycons are the most disappointing when it comes to cosmetic options. But to be fair they’re pretty small so there’s not much to change in the first place.

Still, I went from this:

This rather modest customization set me back around $160, which feels a little steep for a color swap.

As you can see the design tool UI for each controller is pretty easy to use.  As you choose your options the price total on the page goes up which is great.

It can be a little glitchy though. Sometimes options you choose fail to load in or load in and then randomly disappear. Or the UI will just lag and take an absolute age to apply your changes.

Some of the prices are also pretty confusing. Some “premium” options are cheaper than the cheap options. It’s a head-scratcher.

If you’re not artistically minded, Controller Chaos also sells a whole host of “limited edition” controllers that have already been designed for you.

These aren’t as special as designing one yourself but they do tend to look better and often come costing less.

Check out a couple below:

At the end of the day, it’s pretty difficult to recommend a Controller Chaos controller.

This isn’t to say they are inherently bad, they’re not.

If you’re looking for a controller with hacks it’s hard to go wrong with a Chaos Controller. They are just incredibly niche and I’m not sure who they are aimed at.

The versions with mods enabled feel like they are aimed at spoiled kids who are too impatient to get good at their favorite games. But these modded controllers are so expensive I can’t imagine any sane parent buying one.

A fully customized PS4 controller with every option is over $400. You could almost buy yourself a PS5 for that kind of money. A less optimized build will cost you less but they’re still expensive.

So are they aimed at serious gamers? I guess so but I would like to think any real serious gamer would stay away from these kinds of mods. These mods spoil the fun for everyone else.

If you’re legitimately looking to improve your performance the Xbox Elite Series 2 is still the controller to beat (buy one here).

On the cosmetic side, things are a little better. As long as you don’t go crazy with the options they are cool-looking controllers that shouldn’t set you back too much. However, you can get a similar-looking controller like this or this for a fraction of the price.

If you’re really on a budget you can just buy skin and do it yourself for a similar look.

If you want a hacked controller then Controller Chaos controllers are fine. But if you’re looking for anything else, there are lots of cheaper options out there.

You can also read more about the Aim controller which is an alternative to controller chaos.

It depends on what you’re looking for. On Trustpilot, they have largely positive reviews but there are enough negative reviews to perhaps make you pause for a second.

As cosmetically customized controllers go they’re fine. I wouldn’t count them as the best or worst but they can be a little pricey.

For a modded controller they’re good. The mods work as advertised.  But whenever you’re buying an aftermarket product like this you’re taking a risk.

How long does it take to get a controller from Chaos Controller?

Officially they state their processing time is between 4-10 business days. You can shorten this by choosing “Rush Processing”. This should cut the processing time in half.
However, they do warn that if they are busy processing time can shoot up. This probably explains the myriad complaints I’ve found online of people saying their controllers took weeks.

On top of this, you have delivery time. You can pay extra for next-day delivery or wait a few days with a normal delivery option.

So if you’re super impatient and have the money you could have your controller in less than a week. Otherwise, it could easily be 2+ weeks.

What is the Master Mod for Controller Chaos?

The master mod is the bulk buy mod option. Rather than buying the mods individually, you buy them all for a discount. It’s a pretty hefty discount but remember, you probably won’t use some of the mods since they only work with out-of-date games.

How do I turn off the Chaos Mod Controller?