Although pirates aren’t too big on looks, one of the best RPG video games has included some extraordinary vanity items.

These are extremely rare, and there is no way to buy them or cheat codes or promo codes to acquire them easily. The only option to get your hands on Sea of Thieves Curses is with hours of in-game exploration.

We decided to spend those hours so you won’t have to. You’ll still have to spend some time, but not as much as our Sea Of Thieves nerds did.

Before we start talking about the Curses, here’s some important information about these Curses in Sea Of Thieves.

What do Curses do in Sea Of Thieves?

Seeing the rarity of the Curses in Sea Of Thieves, you might think these are some OP equipment or enchantments that will help you rule the seas like Davy Jones, but it’s quite the opposite.

Every Curse in Sea Of Thieves is just a cosmetic item customizing your character’s skin. These bring no power-ups or enchantments, as the title ‘Curse’ will have you believe. But, these also act as a badge of honor for a pirate, boasting a lifetime of experience sailing the toughest tides of the sea.

How many Curses are there in Sea Of Thieves?

How to get Curses in Sea Of Thieves?

Acquiring these Sea Of Thieves Curses is no piece of cake. You’ll be on long voyages for hours, carrying out multiple missions and engaging in loads of sea battles. And one small mistake will cost you the whole voyage, and you’ll find yourself at point zero once again.

It’s a game of patience and strong will but also some smart work. If you can keep your head and follow the steps in our guide, nothing can stop you from adding every Curse in Sea Of Thieves to your inventory.

With that said, let’s dive into all Sea Of Thieves Curses worth knowing all about!

All Sea Of Thieves Curses

Before you can embark on a journey to find these Curses in Sea Of Thieves, you have to carry out several smaller missions called ‘commendations’ and complete the ‘tall tales.’ Don’t stress; we have all these ‘missions’ covered under every Sea Of Thieves Curse. Let’s dive in:

The Curse of Sunken Sorrow

The latest addition to the Sea Of Thieves Curses is the Curse Of Sunken Sorrow, and to get this coral Curse of Sunken Sorrow, you need to finish the Legend of the Sunken Kingdom quest.

Now before you can embark on this journey to the Sunken Kingdom, you need to do 2 things.

To unlock the ‘Mysteries,’ you’ll have to find the following six shrines:

Inside each of these shrines, you’ll find 5 scrolls. So, you’ll have to read through 30 scrolls to unlock the ‘Mysteries’ commendation.

After that, purchase the Legend of the Sunken Kingdom quest from Larina for 50 Dubloons. During the voyage to the Sunken Kingdom, you’ll also have to look for clues from Humphery the Hoarder and answer the Mysterious Scholars riddles.

Once you complete this quest, you’ll receive the coral-themed Curse of Sunken Sorrow in the Vanity Chest.

Also known as the Pirate Legend Curse, this is the most coveted Curse in Sea Of Thieves. With this Curse equipped, your pirate will get glowing blue eyes and a glowing blue skull embezzled on their heart.

But before you can even set off on any voyages or commendations, you need to have a 50 Reputation Level with at least three of the following companies:

Once you complete 50 levels with any of the 3 companies out of these 7, you’ll get the Legendary Curse in your Vanity Chest. That’s 50 levels 3 times, so a total of 150 Reputation Levels.

The Curse of The Order

You’ll now receive the Fateful Memories commendation, the Curse of the Order, and Captain Briggsy’s sword. It’s the only Curse that rewards a weapon, that too of the much-feared Captain Briggsy.

The Shores of Gold Curse

The Gold Curse in Sea Of Thieves is by far the most impressive one and the most demanding one. Players have to finish all 9 Tall Tales of the main questline 5 times. And then, you will unlock the ‘Seeker of Grand Adventure’ commendation. Once you do that, your pirate will get a golden eyeball and patches of gold all over the skin. It’s absolute gold- pun intended.

Before you can unlock the ‘Seeker of Grand Adventure’ commendation, you’ll have to complete the following commendations too:

After completing all of these commendations, you’ll also receive a Gold Hoarder figurehead for your ship to complete the golden look.

One of the coolest Sea Of Thieves curses is also the easiest to attain. The Ashen Curse will make your pirate glow orange from the inside. It looks like your pirate can spit fire, in other words, super cool.

Here’s how you can acquire the Ashen Curse:

Although this has the most steps, it is the easiest out of all the Tall Tales for Sea Of Thieves Curses.

And that’s pretty much it for now. Our favorite Sea of Thieves Curse is the Gold Curse. After all, what’s a pirate without a little bit of gold bling.

As soon as Rare adds new Curses in Sea Of Thieves, we’ll update this page.

Next Read: Sea of Thieves Ritual Skull: How to Find, Use & Sell Them 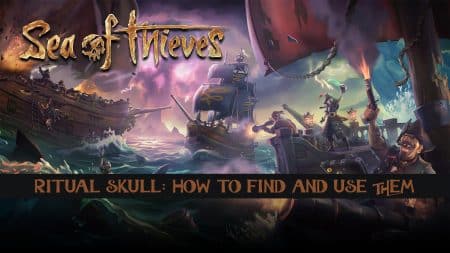 Sea of Thieves Ritual Skull: How to Find, Use & Sell Them