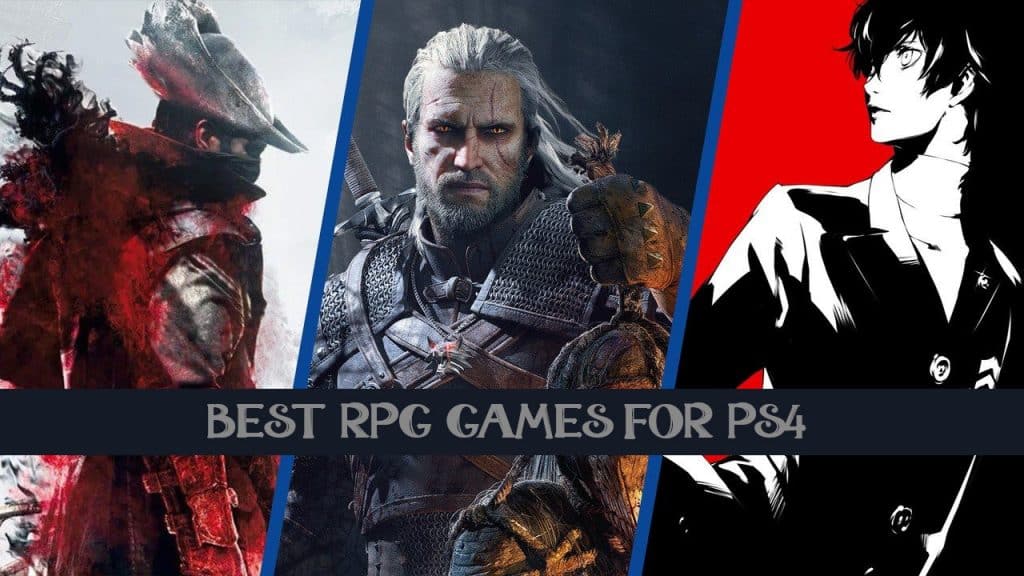 Role-Playing Games have risen to become one of the greatest and most popular genres playable today, notably amongst PS4 gamers.

This article honors the finest RPGs from the PS4 console’s history. There’s plenty here for all RPG fans; from Gothic horror crossovers to Kung-Fu action bonanzas to the more classic turn-based adventures.

RPGs refer to a game type whereby you get to progress thru a plot mission usually featuring multiple side quests, gaining experience that improves different competencies for your character or group.

Why Play RPGs on PS4?

Remember: Thanks to backward compatibility, all RPGs in our collection will also run on the PS5.

But you don’t have a PS5 delivered to you yet. We know.

Till then, check out these best PS4 RPGs you can play on it.

Below, we have handpicked and reviewed the 7 best RPGs you can get to play with your mates or family on your PlayStation 4 console:

Before the Odyssey’s release, the Assassin’s Creed franchise blended three storylines into a single playable plot throughout all of its games, however, Ubisoft’s latest title divides its adventure into 3 halves.

Consequently, completing the Assassin Creed campaign—of Kassandra and Alexios’ tale & seeing the final cutscene is not really the ending.

The quest of Kassandra and Alexios is complete, however, the finale to both the current day narrative as well as the Isu tale can only be revealed by accomplishing side tasks.

Throughout all, there are 3 “final” sequences in Assassin’s Creed Odyssey, two of which are voluntary.

Compose your odyssey and be a renowned Spartan warrior in Assassin’s Creed Odyssey, a captivating experience in which you have to shape your future and establish your pathway in a universe on the verge of disintegration.

Final Fantasy VII Remake is a futuristic remake of one of the most iconic JRPGs (Japanese RPG) of all time, utilizing cutting-edge tech to restore and extend Square Enix’s epic RPG journey for the present generation.

Almost every gameplay aspect would seem like a fitting tribute to enthusiasts: the aesthetics are far above the script’s pre-rendered cutscenes, and the soundtrack has now been meticulously modernized to current standards.

Experience one of gaming’s finest and cherished settings with such a degree of complexity and detail that only the current era can provide.

The halves feed off each other, resulting in strategic, dynamic battle exchanges.

Play the position of Cloud Strife, a merc and formerly of Shinra’s finest SOLDIER unit, you pair up with anti-Shinra group Avalanche as they scale up their opposition in a post-industrial fantasy universe that has collapsed under the authority of the sinister Shinra Electric Power Company.

Get to engage with iconic characters as you fight in epic battles, and immerse yourself in a narrative that has enchanted an era!

If you’ve fallen in love with the series’ risk/reward dynamics and brutal retribution, Dark Souls 3 is just the title for you! Dark Souls 3 completes the Dark Souls triad, enabling you to relive the series’ haunted environments and epic battles.

Following the success of Bloodborne, FromSoftware was eager to apply all they’d learned from their PS4 smash to their flagship franchise.

The last chapter in the Dark Souls series and storyline adds horror aspects to the earlier games’ dark fantasy repertoire, as well as adaptable weaponry that could be utilized in 2 distinct ways based on the situations.

After witnessing a real-life catastrophe that combined and obliterated all worlds, Dark Souls 3 enabled characters and locales from all Soulsborne titles to unite and connect before bidding goodbye to the franchise.

It’s a lovely and heartbreaking send-off, and it’s well earned for the genre-defining film.

Are you ready to don a mask and unveil the truth?

Persona 5 Royal is jam-packed with new characters, new locales to traverse, storyline depth, and a new grapple hook system that allows you to access new regions. Prepare to develop your powers in the metaverse and in your everyday lives as a new semester begins at Shujin Academy.

Put on the Joker mask and accompany the Phantom Thieves of Hearts. By pulling free from contemporary society’s shackles and conducting huge heists to penetrate the brains of the unscrupulous and force them to abandon their vices!

In many respects, the gameplay does seem like a sequel with everything you enjoy, but with a lot of new content and adventures to improve the game.

Sometimes content replicates (for example, conquering the same palaces), but the ability to go play through with different characters and personas means it’s not a rerun.

Experience the once-in-a-lifetime story arc, cutscenes, and different outcomes as you traverse Tokyo, unleash Personas, and build yourself a Thieves Den!

Overcome your emotions in this Combat RPG – Battle the Souls of the Fallen as you traverse Purgatory’s afterlife. Play Crystar as four distinct individuals and discover the truth behind their stories and mysteries by unlocking their recollections.

Rei & Mirai, her younger sister, get taken into the afterlife of Eternal torment. Rei forms a deal with the Purgatory Demons to combat the creatures that have infested their planet to save the sister. Will Rei be able to preserve her sister’s Soul in time?

To fight the Torments and horrors that await them, Rei and her companions must tackle their pasts and their tears. You may call upon Guardians who reflect the characters’ ideas to battle alongside them, unleashing devastating special tactics.

While you play through the adventure, you’ll be able to independently swap between four characters to utilize in battle, notably Rei Hatada.

Weeping will assist you in defeating creatures and empowering your gear. Tears are a symbol of power in CRYSTAR, not sorrow.

An extraterrestrial entity battles with you in the fighting mechanism. Accumulate your sorrows and undergo Tormentstoo call upon your Guardian!

Bloodborne is an Action RPG with a focus on effective combat options, including interpersonal and varied gameplay and substituting wizardry with technologies and a weaponry arsenal.

The game runs at 30fps/1080p and has online components, character customization, and other concepts akin to the Souls series.

The game’s dark perspective on Cthulhu legends is sure to be regarded as one of the PS4 generation’s greatest adventures. Bloodline pits superb combat gameplay vs a massive gothic environment.

Pursue your demons while you seek answers in the historic city of Yharnam, which is now plagued by a weird endemic sickness that is spreading like wildfire across the streets.

Danger, murder, and insanity await about every corner of such a dark & terrifying world. Play to uncover its deepest secrets and get to live.

The cobblestone streets of Yharnam are a character in their own right, as Victorian neighborhoods fold and overlap, providing the foundation for some of the finest conflicts on any platform.

Bloodborne is one of Sony’s most intriguing new titles, a work of art in both visual style and game mechanics.

Witcher 3 is arguably the best RPG many have played so far: it features a massive open-world game that unfolds a lengthy, epic story.

The Witcher 3 also provides a remarkable amount of side missions which are extremely engaging with every mission telling its mini-story.

Justifiably, the Witcher: Wild Hunt occupies our top spot. The gameplay is terrific, quick, and reactive, but it’s the conversation and options available that will have you returning for many playthroughs and exploration.

In The Witcher, you game as Geralt of Rivia, a skilled monster hunter entrusted with tracking down a child of prophecy in a large open world featuring pirate islands, merchant cities, treacherous mountain routes, as well as abandoned tunnels to traverse.

Once you’ve conquered the main plot, there are several fantastic DLC packs to play.

And there you go! Our list of the best RPG games to play on your PS4 console. I’m sure you haven’t played all of these on your PS4. But until the PS5 takes the top spot, make the best of these times, make memories!