Minecraft Keeps Crashing: Here’s How to Fix It! [Solved] 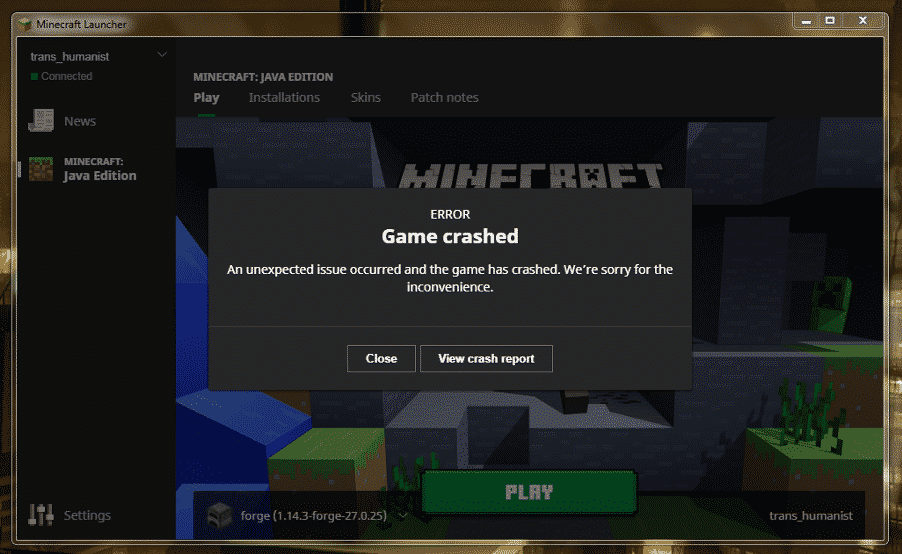 Minecraft is an extremely popular game, especially for its features, its multiplayer gaming, and its innovative freedom. From giving choices of exploring different worlds to hosting other players in your own world, Minecraft is nothing short of a world of its own.

This game has created a benchmark for other multiplayer games in development. Despite Minecraft’s huge success and revenue generation owing to its uniqueness, it has also become a root cause of the disparity among multiplayer gamers. Users are now often complaining of crashing Minecraft.

A sudden shutdown of Minecraft while playing or loading is considered a crash. Earlier versions of Minecraft used to prompt an error report screen, but this was removed.

Even after removing this feature, sometimes an error report is displayed on the screen before crashing. The only silver lining in these crashes is that you get crash reports, necessary for further diagnosis.

Why Does My Minecraft Keep Crashing?

Crashes in Minecraft are not automatically scheduled actions. Instead, they are the results of an ongoing action.

A crash may be related to the hardware, software, a recently changed Minecraft mod, or something unique. The incompatibility of a plugin with the software may also be a reason why your Minecraft keeps crashing.

Even server connection, mods, pre-existing bugs, and updates can be linked to why your Minecraft keeps crashing.

Identifying the root cause requires accessing the related crash report.

A Minecraft crash report is generated in the FTP File Access mode. These reports provide detailed insights into the causes behind the crashes which makes them easier to troubleshoot. Different crash reports may seem identical but once you get a hang of it, understanding these reports becomes a simple task.

How to Find Minecraft Crash Report?

A crash report can be located through your game panel. Select FTP File Access in your Game panel and log in.

Once inside FTP File Access, locating a crash report folder is simple. The crash-reports directory will contain multiple files in case of repeated crash events.

Go through the latest file for a better understanding of the issue. To read these crash reports you need to select the edit link.

Your crash report will begin with some unique splash texts, followed by the date and time of the crash. The actual reason for your server crash will be mentioned below the description followed by its possible solution.

There are many different solutions to a single crash event, and you will not be able to find a breakdown for each error.

What Are the Common Minecraft Crash Issues?

Minecraft has grown into a huge community, with players from all over the globe. Although crashing as of late has brought a negative sentiment about the game. Yet, it is not always the fault of the developers.

More often people tend to make unrealistic changes to the game or develop a huge world that utilizes a large amount of the available hardware capacity. These four reasons are the most common causes of Minecraft crashes.

Problematic hardware might be the reason why your Minecraft keeps crashing on launch or in-game. The easiest way to diagnose a hardware failure is to play games that require a similar hardware specification. If other games do not experience visual degradation or system notifications, it is unlikely a hardware issue.

But in case you witness the degradation of visuals or crashing, your device’s temperature becomes an important aspect of affirming the cause. A sudden rise in these temperatures is mostly related to clogged vents or a damaged fan. Dust will be visible throughout the thermal exhaust in CPUs and laptops.

Note that you can clean clogged vents yourself, but you can easily damage the components. Refer to professional expertise instead. We recommend a full-blown disassembly and cleaning.

Another possible reason for excessive heating might be a damaged RAM module or video card. Even with the absence of these issues, overheating is a common result of INTEL GMA cards. The Graphics Media Accelerator is known for having issues with the OpenGL programming interface.

Recently installed anti-malware or anti-virus software can be why your Minecraft is crashing on startup. The game should ask for an exemption from scanning activities. But in case it doesn’t and your game crashes, you should try running the game after putting the Minecraft folder as no-scan directories.

Even system procedures consume a lot of resources. If there are too many programs operating in the background, all you can do is try disabling them all as a preventive measure.

Incorrect versions of mods can create a conflict in the game directory, another reason why your Minecraft keeps crashing. These are not limited to just a mismatching version, even multiple mods in a single system can force such crashes. Mod-based crashes are easier to resolve after identifying its source.

If your game starts crashing soon after installing a new mod, this new mod could be the possible source. These crash cases are not limited to a faulty mod. It might happen that the latest mod you installed is not compatible with existing mods.

Incompatibility between mods and plugins can be another potential source of the crash. For some plugins to work, you will need to remove a few mods or the incompatible combination will crash your Minecraft.

JVM or Java Virtual Machine is the program that runs Minecraft. There are instances when Minecraft crashes but under unique circumstances, even the JVM can crash. These crashes can be traced to huge operations in Minecraft such as gigantic TNT explosions or moving numerous blocks at once.

Such activities put heavy loads on memory and processor capability but why your Minecraft keeps crashing is mostly due to a lack of RAM.

In the case of JVM crashes, the JVM handler posts the crash notification messages. Other crash cases are displayed by Minecraft itself.

These crash reports cannot be found in the crash_reports directory. Instead, JVM crash reports can be found directly in the .minecraft folder, with the name “hs_err_pid<PID>.log”.  <PID> is the Process ID of the JVM at that time.

How To Fix Minecraft Crashing?

Every problem has a solution. Identifying the source of the Minecraft crash is of
prime importance to resolve it. While this step is lengthy and troublesome, there are several alternate fixes that you can try.

The efficiency of hardware equipment can be reduced when clogged with dust. This accumulation severely impacts the heating dissipation in these devices.

Such hardware issues can be resolved by frequently cleaning air vents and checking for sudden overheating of the device. Scheduled maintenance run on these devices will keep the hardware in optimal performing conditions.

It is equally important to have updated software drivers as an obsolete graphics card can crash Minecraft. These drivers should always be downloaded from authentic websites.

You can easily check for authenticity by following these methods. Downloading and installing these drivers manually requires a decent amount of computer knowledge.

Alternatively, you can select an update automatically option from driver settings.

Here is how to exempt Minecraft from Windows Defender.

Another major step for resolving crashes would be to keep an eye out for the
crash_reports. Novice players can share these crash reports with the Minecraft
community to resolve their issues.

You can also use the crash report utility software Hooper to manage, store, and maintain crash reports exclusively for technical Minecraft troubleshooting. This software matches your crash report in its database.

In case of a match, the software prompts you to visit its support page. In case no match is found (i.e. – your crash report is unique), Hooper prompts you to make the report public.

The real fun of playing Minecraft is using mods. Mods highly enhance the gameplay with their customization option. Moreover, there is no bar over the number of mods you can install in Minecraft.

Having a high number of mods can make it difficult to identify a faulty one. The best and easiest way to fix crashes that may be caused by Minecraft Mods is to uninstall all the mods.

You can always download these mods without additional charges. By doing so you can easily identify the mod deliberately crashing your game.

If in case none of these fixes work, then identifying the cause of the crash can
become difficult. The best way out of this situation is to reinstall Minecraft.

Alternatively, you can use third-party uninstallers like Geek, Revo, and IObit to remove the game file and all its directories.

Why Does Java Crash When I play Minecraft?

Your game driver will either be NVIDIA, AMD Radeon, or Intel integrated graphics. Always download these drivers from official websites only

How do you fix exit code 1 in Minecraft?

A possible source for exit code 1 is hard to track down, this code impacts only PC players. The solution to this issue is simple to follow.

If you are still getting the same code, delete and reinstall Minecraft and Java both.

Why does y Minecraft keep crashing on Windows 10?

Minecraft on Windows 10 is fabled for crashes. Though Microsoft is developing frequent updates for Windows 10, there is no single solution that can be referred to.

Note that Windows 10 is a multi-faceted OS and resolving basic issues is not easy. Searching for a compatible driver sequence for GPU and Windows 10 can be a solution.

If the game has been crashing after a recent windows 10 upgrade, we recommend rollback of an update to check. Update after a few weeks when Microsoft resolves these issues.

Why do Minecraft Dungeons keep crashing?

There are many reasons why your Minecraft Dungeons keep crashing. Bugs force this game to crash mostly on Xbox and PC platforms. Shockingly, there’s no solution available for this issue. However, Mojang support has laid out a couple of potential approaches to resolve issues, the only options you have until a lasting solution is made available.

Why does my Minecraft say not responding?

There can be several reasons why your Minecraft prompts ‘Not responding’ and then suddenly crashes. These reasons can range from JAVA version or RAM capacity to permissions required for running Minecraft software. Try uninstalling Minecraft and re-installing it from the official Mojang website. The reason could most likely be something related to your PC specs.

There can be thousands of possible reasons behind your Minecraft crash, although the most common reasons why your Minecraft keeps crashing may be due to hardware or software issues, Java virtual machine errors or incompatible Mods. Each of these sub-cases has a distinct solution. Make the best of Minecraft’s extensive community of users right here!