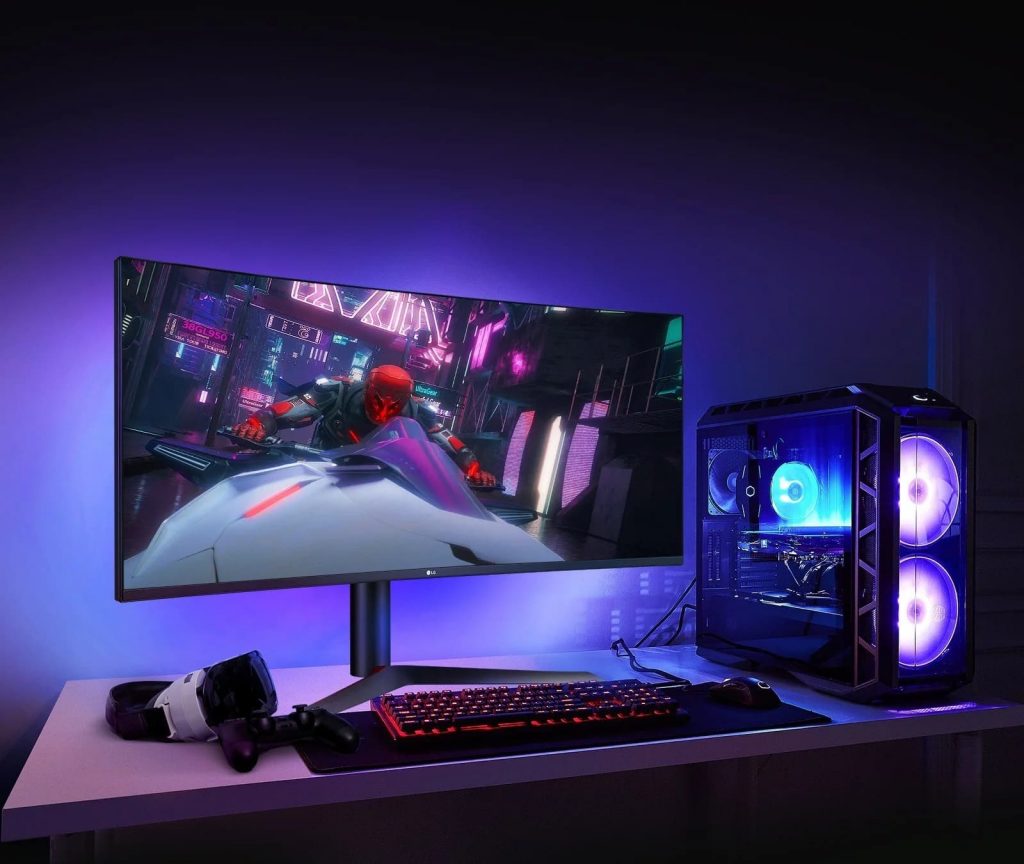 G-Sync is the highest gradient for computer gaming, essentially a hardware package meant to provide the ultimate gaming experience.

Gaming monitors manufactured and developed with G-Sync come with the hardware add-on provided exclusively by NVIDIA.

Manufacturers pay a sufficient premium to get this tech on-board to their displays, just why G-Sync monitors are expensive. But G-Sync does offer unparalleled gaming experience and there is nothing better you can buy today.

What is NVIDIA G-SYNC?

Before explaining what is NVIDIA G-Sync or is G-Sync worth it, you need to know about the GPU-monitor relationship when it comes to gaming.

Modern games are a stratospheric leap over what gaming was even a decade ago.

From the likes of Road Rash, gaming graphics have come a long way to modern game titles like Far Cry 5. But the related graphics need to be rendered in real-time at resolutions as high as 4K along with immersive details.

For this, not only do you need a powerful GPU, but you also need a monitor that can display each frame rendered by the GPU as well.

The number of frames a GPU renders is termed as the framerate it can deliver, specific to the required in-game graphics detailing and quality settings.

On the other hand, the number of frames a monitor can display per second, known as the refresh rate, is how much of the graphics rendered are actually detailed out to you.

Now, you should know that the graphics card does more than just render images. It also relays the graphics to the monitor as display output.

This is where some common issues come up in modern gaming performance. Even if you have a powerful graphics card churning out more than 100 frames per second at moderate-to-high details on a game, with a monitor limited to 60 Hz refresh rates, you are missing out around 40 frames per second.

Now, if you upgrade the monitor, another issue will crop up. The frames rendered by the card and those displayed on the monitor should be in complete sync for smooth gaming and this does not always work out.

Syncing GPU framerates and display refresh rates require additional processing power which the GPU may not be able to provide consistently.

These issues could impact your gaming experience, causing screen tearing, ghosting, stuttering, and artifacts, among others.

And they can rarely be solved by upgrading the graphics card or the monitor or both. The problem lies in syncing between the card and the display, which is just where NVIDIA G Sync comes in.

NVIDIA G-Sync is a major upgrade over V-Sync, the first effort toward syncing video cards and display frames.

Although V-Sync works in principle and in real-time, virtually syncing framerates do not work out when you are pushing 144Hz on NFS Heat.

Other display issues, the most common problem with V-Sync is input lag. For this, you need specific hardware acceleration as well.

With G-Sync, the video card does not sync up frames with the display. G-Sync displays come with a separate NVIDIA scaler module.

In simpler words, this is the hardware support your graphics needs to sync frame rates with the display.

So, the simplest definition to what is NVIDIA G Sync – It is a hardware-based display syncing tech installed to monitors for real-time synchronization with graphics rendered by your video card.

Why is G-Sync Monitors So Expensive?

G-Sync monitors are high-resolution and 144 Hz+ displays that come with the scaler module manufactured by NVIDIA.

The monitors are originally manufactured by their respective brands along with a specific circuitry for the NVIDIA G Sync scaler module which is distributed to each brand and installed.

The reason why G Sync monitors are so expensive is that you purchase not just a high-resolution and performance-oriented display but the added module from NVIDIA which makes G-Sync work.

Does G-Sync Make a Difference?

G-Sync is the best performance upgrade you can give to your gaming setup. As explained before, you need more than just a smashing display and a monster video card.

They need to work together in complete sync to offer smooth frames at consistent refresh rates close to 144Hz or more without forcing you to reduce graphics display settings.

If you currently run an NVIDIA GeForce RTX series card with a 144Hz TN panel monitor, you may face common graphics errors like stuttering or screen tearing at high refresh rates.

What you need to understand is that your graphics card does not render display frames at the same rate each second.

The number of frames a card can churn out every second, i.e. the frame rate depends on the game and the graphics settings as well.

Now, if the graphics card is churning out different frame rates, the display must sync with it to deliver smooth frames each second.

The G-Sync scaler module helps maintain this syncing. So, if your card renders 120 frames in a second and 140 frames the next, the module will seamlessly sync with the monitor to display just as many frames.

Also, with the module in place, your graphics card is not delegated to manage the syncing anymore so it can completely work at rendering frames.

So, it can deliver better frame rates without compromising on output quality.

In short, a G Sync monitor can make a substantial difference to your gaming at optimum display qualities with consistent refresh rates around or above 144Hz.

Screen tearing, ghosting, artifacts – common issues due to poor syncing between the video card and the monitor are taken care of by G Sync.

Worth mentioning, that G-Sync is not compatible with AMD graphics cards. But with a G-Sync monitor, you are sure to get the best out of your NVIDIA card.

Is G-Sync Better than Free Sync?

AMD FreeSync is the only available alternative to NVIDIA G-Sync. Although working on the same principle of syncing graphics card outputs with display refresh rates, Free Sync works differently.

Unlike G-Sync which locks display outputs to higher framerates of the display, Free-Sync simply assists the graphics card to produce better framerates.

Another difference between G-Sync and FreeSync lies in the syncing module. G-Sync modules are solely manufactured by NVIDIA, in keeping with their internal quality and performance benchmarks.

AMD FreeSync however is based on the DisplayPort version 1.2 module standards as devised by VESA.

So, FreeSync modules are manufactured by AMD and other third-party manufacturers such as RealTek, Novatek, etc.

There is a substantial difference between G-Sync and Freesync monitors. You may need to pay up $150 or $300 more for a G-Sync display in place of a Freesync monitor with the same specs.

However, is G-Sync worth it over Free Sync based on value-for-money?

This depends squarely on the gaming genre you prefer and the gaming experience you want other than your budget.

Does G Sync Work with All NVIDIA Graphics Cards?

G-Sync was officially released in 2013 and popularized as the benchmark gaming tech by 2015. So, not all graphics cards will be compatible with G-Sync. Here is what you need to know –

If you do not have the necessary graphics cards, you will miss out on native G-Sync, but you can still use the G-Sync Compatible threshold.

G-Sync Compatible is NVIDIA’s way of competing with AMD in the much larger entry-to-mid level gaming market.

With a G-Sync Compatible monitor, you do not get the native scaler module.

But what you do get is NVIDIA’s quality certification for the monitor’s gaming performance. It works like Freesync but is specific to NVIDIA graphics cards.

G-sync compatible is a quality certification from NVIDIA attributed to a handful of monitors certifying that they can offer a smooth gaming experience with NVIDIA graphics cards via DisplayPort 1.2 or higher support.

You will also find a G-Sync Compatible Freesync monitor, displays that can work with both NVIDIA and AMD graphics cards.

Well, native G-Sync monitors are expensive, but they offer an unparalleled gaming experience.

Even if you have a top-of-the-line graphics card such as the NVIDIA RTX 2080 Ti and a 240Hz IPS gaming display, the gaming experience with and without G-Sync will be noticeable.

You will ultimately need dynamic syncing at such extreme performance gradients. This makes G-Sync a premium necessity. So, yeah, in our opinion, G-Sync is absolutely worth it.

If you have the budget and if you want to take your gaming experience to the next level, upgrade your card to the upper RTX series and get a G-Sync monitor.

In case you are an AMD loyalist, however, there is a lot you are missing out on. G Sync is worth it simply because there is nothing like it available in the market.