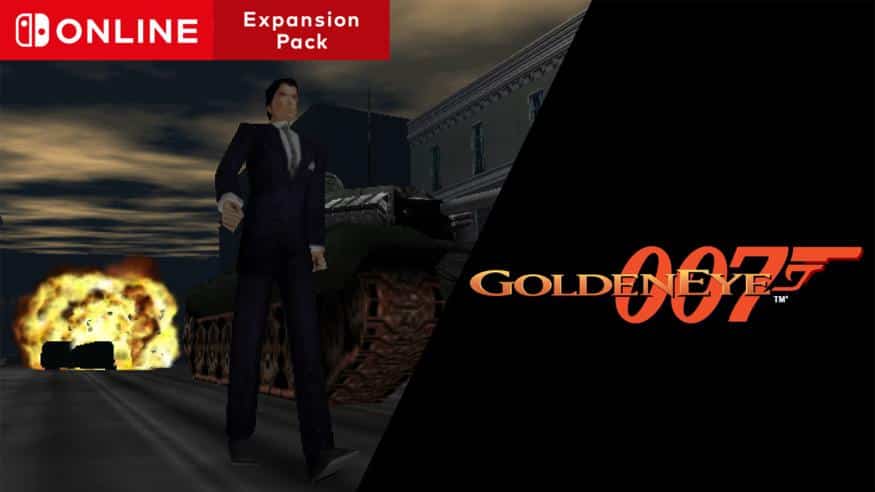 Enter a world of espionage as Bond in GoldenEye 007 on Switch!

Play as James Bond in the spy thriller GoldenEye 007. For your global undercover mission to destroy the GoldenEye weapon satellite, you will have to traverse underground bases, storm a military train, and sneak through the undergrowth. M will brief you on the mission’s goals and objectives, and Q Branch will provide a variety of tools to aid you in your work, but it will be up to you to ensure the mission’s success or failure. You can play the game with up to three friends locally or online in the four-player multiplayer mode, saving the day and then competing for the gold in intense first-person espionage combat.

In addition to pistols, submachine guns, assault rifles, a sniper rifle, grenades, and throwing knives, the game offers over 20 different weapons.  After a given amount of shots, most firearms have a limited magazine and need to be reloaded.

Even though different guns have different features, some firearms use the same ammunition. For instance, bullets for pistols and submachine guns are interchangeable. When a weapon strikes a specific bodily part, it does a variable amount of damage. Shots to the head are more lethal than those to the arms or legs.

When compared against other firearms, the Klobb’s quick rate of fire and broad bullet spread are advantageous. However, the submachine gun’s weak firepower and punishing recoil make it a poor choice.

For further lethality, the Klobb can be held by two people at once. When dealing with guards or opponents, it’s best to remain undetected as much as possible. To kill foes in stealth, some firearms use a silencer or telescopic sight.

There are three different levels of difficulty available for each stage in Goldeneye 007: Agent, Secret, and 00 Agent.

These modify things like the number of goals, the amount of ammunition at your disposal, and the amount of damage your foes can take and deal.

To access the two additional levels, you must first beat the game on Special Agent and then on 00 Agent.

If the player has already completed a level, they can return to it and try to beat their prior time to get access to hidden cheat features like more lives or invulnerability.

After beating Goldeneye 007 on all three difficulties, a new mode will unlock where the player can customize the level’s difficulty independently by modifying the enemies’ stats such as health, response time, aim accuracy, and damage.

Other games coming with the Expansion Pack

With a Nintendo Switch Online + Expansion Pack membership, players can look forward to even more content, including additional classic Nintendo 64 games and features.

Access to over a hundred classic NESTM and Super NESTM games, a smartphone app that enhances features of supported games, and the competitive online battle game PAC-MANTM 99 are just some of the perks available to members of both Nintendo Switch Online plans, in addition to online play and the Save Data Cloud feature in a number of games.