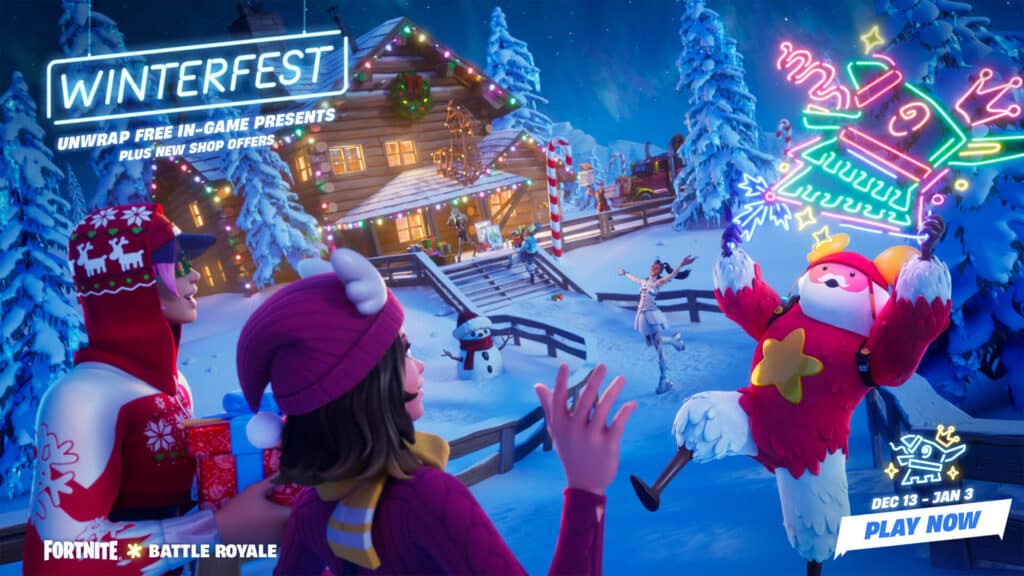 This is probably the game’s fan-favorite part of the year. The annual Fortnite Winterfest event has officially started, during which Epic Games celebrates the holiday season by gifting out a ton of free cosmetics to users. On January 3, it lasts until 6 AM PT/9 AM ET.

For those who took part in last year’s Winterfest, not too much has changed. Starting today you can visit the Winterfest Lodge–accessible from a new button on the main menu–and open one present a day until you’ve opened all 14 of them. Across those 14 presents you’ll find 17 free items, including two gliders, two wraps, three lobby tracks, three sprays, a back bling, pickaxe, contrail, emote and emoticon.

What you need to know about Fortnite Winterfest 2022

Naturally, Fortnite’s Battle Royale modes are also impacted. The snowball launcher, a powerful weapon, and presents—which contain a variety of high-quality loot—are emerging from the vault during Winterfest. Additionally, Sergeant Winter will be driving a large truck around the island and throwing gifts to everyone who doesn’t shoot him. Thus, unless you don’t want any presents, don’t shoot him.

The majority of the free Winterfest Lodge merchandise won’t be disclosed to us by Epic, but they did reveal the new free skins, which are updated versions of Adeline and Guff called Arctic Adeline and Sled Ready Guff.

There’s more where that came from

The Chill-la-la-Llama back bling is a special gift available to Fortnite Crew members this month. Crew members should receive it the next time they enter into the game. Check out Snowdancer, one of the first brand-new Winterfest attires, in the item shop.

Of course, there are also a ton of quests with a Winterfest theme, as well as a list of Creative islands with Winterfest themes that Epic has selected for you to explore.

The Winterfest party didn’t only begin with this week’s update; it also marked the year’s final big patch. The Chapter 4 Season 1 battle pass super styles, currently available in the bonus rewards section of the battle pass tab, are one significant addition. The Doom Slayer is regrettably not one of the skins receiving Super Styles, namely Selene, Helsi, Dusty, Massai, and The Ageless.

Here are the Fortnite 23.10 Patch Notes:

Speaking of Winterfest skins, let me tell you about this year’s hottest Fortnite skins, both male and female!