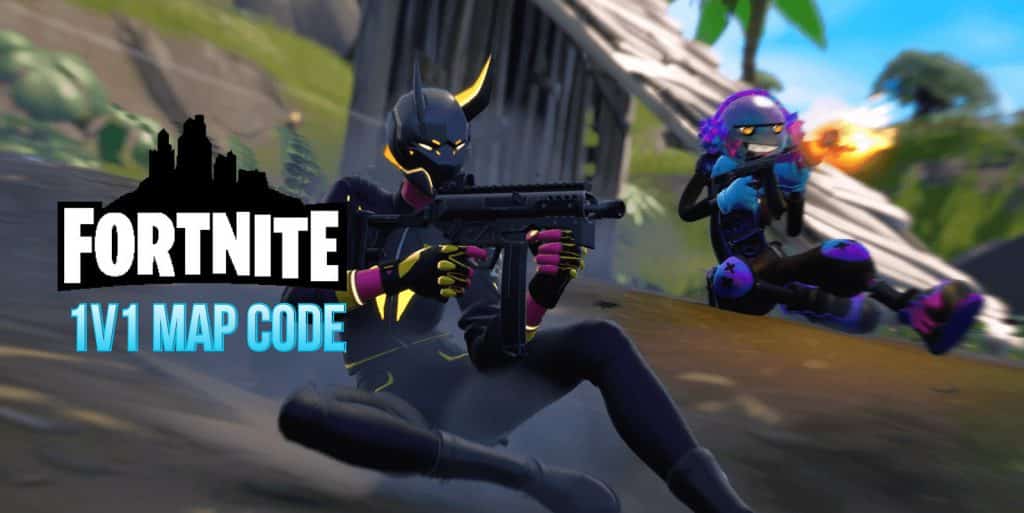 Ah, Fortnite. Is there anyone who hasn’t played the battle royale by now? It’s definitely the most recognizable in the genre and for good reason.

And even though the game is fairly dated (originally released in 2017), it’s one of the most recognized IPs in the gaming industry today.

There have been plenty of updates since release as well as notable collabs with brands, celebrities, games, and pop culture references.

Soon after Fortnite released Creative Mode, which further solidified the game’s standing amongst other battle royales. Adding in the ability for player-created maps and game modes makes any game have near limitless content.

And that’s what we’re here to do today. We’re on the look for the best Fortnite 1v1 Map Code to take your game to the next level. But if you’re new to using map codes, here’s what they’re all about.

What are Fortnite Map Codes?

Map codes are simply codes for player-generated content like unique maps, game modes, etc. They’re an easy way to immediately go onto the map you want, rather than sifting through thousands of other games.

This makes it much easier for players to find specific maps and game types they want to play. Instead of going into Fortnite and manually searching for games, we’d recommend finding game modes online.

You can find them from content creators and sites which show the exact map code. This way, you’re getting the best of the best games and not just any random map which may not be worth a scrap.

Today though, the game type we’re going to be focusing on is 1v1 codes in Fortnite. 1v1’s are notorious in almost any shooter game to truly dominate your opponents. Or lose, get flossed on, and rage quit the game.

This is the “Ultimate” 1v1 map code in Fortnite and it’s a simple, yet super stylish battleground. There’s a neon backlit arena and staircase to build your towers as you face off against the enemy.

As soon as you spawn into the map, there’s a well-stocked arsenal of weapons, fancy skin colors, and a toggle to turn double-pump on or off to have a fairer fight. It’s simple, but it’s still very cool.

I love the backdrop and overall vibe, but mostly because it’s straight to the point. Nothing fancy, just a good ol’ fashioned gunfight.

For players who want to use everything the game has to offer, this 1v1 map code with any gun is the right map for you. There’s quite literally everything in the game available to choose from in the starting area.

Surrounding the arena are bright green walls with 3 different doorways on opposite sides of the map. Inside, there’s the waiting room with all the gear you’d need and a cool little music room to unwind or hang out in.

And after that, pick up your loadout and start blasting in the middle of the arena. Build up your tower as fast as possible and get your Victory with this Fortnite 1v1 map code.

While well-designed arenas are great battlefields, sometimes you’re looking for a 1v1 map code in Fortnite that feels like Fortnite. If that sounds like you, the ‘Finest’ 1v1 realistic box fight map should be your battleground of choice.

It’s a well-designed layout but still keeps the classic Fortnite aesthetic. This makes for a ‘realistic’ battle like the one you’d find in the standard battle royale mode. You can group with up to 4 players, in four separate teams and duke it out on this box fight map.

There are also 8 different realistic locations to choose from so you can switch between them as you play. This is a good way to train for fights in different environments and adds in some variation to your battles too.

Fans of the vaporwave aesthetic, you’re going to want to check out this uber-cool retro 1v1 map.

There are 4 different versions of the map to choose from which you can find in the video linked above. But I think the Night version of the map is gorgeous and should be your stadium of choice.

You’ll find palm trees surrounding the battlefield area, which is standard for the vaporwave aesthetic. What makes this map stand out, though, is the pinkish-purple lighting all around; from the clouds, neon lights, in-game fog, and the purple-hued buildings in the background.

It makes you feel like you’re fighting high above the clouds in a windy, cyberpunk-themed city, and I’m here for it.

Our last featured Fortnite IvI code map is going to be the 1v1 Lobby. And as you can tell from the name, it’s a super simple arena concept. There are two sides as soon as you log in, a red zone and a blue zone.

What made this map stand out for me is the surrounding aesthetic. You’re literally in a fight among the stars and I think that’s a great backdrop for a fight to the death. If you weren’t a fan, you can switch it off to find the surrounding land of Fortnite, but why would you?

There are plenty of weapons to choose from in all the rarities you could need and a stellar galaxy view.

Also Read: Fortnite Unblocked – Why is it Blocked & Can You Play Again?

How To Redeem Map Codes

The simplest would be finding the link to the Epic Games creative map and clicking “Add To My Library”.

But if all you had was the code, here’s how to redeem it in-game: