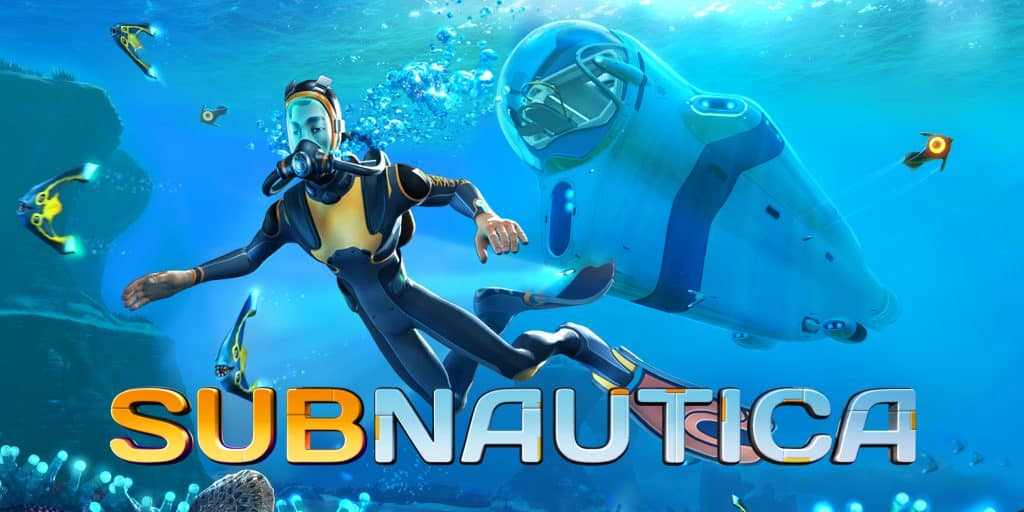 Subnautica is, of course, yet another survival game. A very successful one.

However, it’s a survival game with a twist. You will spend most of your time with Subnautica in the salty brine.

Whilst underwater, you will have to constantly manage your food, oxygen, and battery levels.

Occasionally you’ll get to leave the deep dark sea and make landfall.

So far, Subnautica sounds like a pretty standard survival game. Just with a salty twist.

Well, no, not really. You see, most of your time with Subnautica will be spent as a pacifist.

You still spend hours crafting, scavenging, base building, and upgrading your gear.

But you never become top of the food chain.

In Subnautica, you just get better at evading enemies and running away from them.

If you are like me, you have a limited amount of time you can spend on gaming, this means you may never get to see all the awesomeness that Subnautica has to offer.

Thankfully, there is hope!

Can You Cheat in Subnautica?

Thankfully, there’s a whole host of Subnautica cheats available which can be used to speed up your progress in the game massively.

Better still, some of the Subnautica codes can even be used to skip straight to specific milestones in the story.

This is great for added replay value or those of us on a time crunch.

There are just a couple of catches to using these Subnautica cheats.

First, they disable all achievements. If this is something you care about, be sure to make a backup of your saved game before you cheat.

Second, the cheat codes are essentially console commands for Subnautica.

These feel like they harken back to Subnautica’s alpha and beta days.

Using some of the commands, especially anything aimed at triggering in-game events, can cause game instability and bugs.

If you have a saved game you are particularly fond of, you should back it up before engaging in any Subnautica cheats.

How to Use Console Commands in Subnautica

Now that we have the warnings out of the way, let’s get into the good stuff.

As mentioned above, Subnautica cheats are activated through console commands.

These originate from the debug tools used by the developers during the game’s extended time in early access.

By default, the console is deactivated. So, your first step is going to be enabling the console command window.

This process differs depending on what platform you’re playing the game on.

That’s right, Subnautica is one of the VERY few games that allows players to access the command console on PlayStation and Xbox systems. Awesome!

Surprisingly, the console is actually the most difficult to access on a PC. Take that PC master race!

After you press ENTER, a little gray box will appear on your screen. This is where you type in the console commands and Subnautica codes.

Next is the Xbox edition of the game.

The Xbox version has two ways to cheat.

Of course, no one is quick at typing when using a gamepad.

Thankfully, the developers thought of this. If you pause the game and then press LB+LB, a new menu option. This is the Subnautica debug menu.

Whilst these are more limited than the options available to you by typing your console commands, they are useful.

The process to access ​​Subnautica PS4 cheats is basically the same, just with different button prompts.

Just be warned, some of the Subnautica PS4 cheats here definitely lack polish and are a little janky. Same with the Xbox version.

The teleport menu especially can really confuse the game.

You see, like most games, Subnautica doesn’t load the entire game at once. The map is much too large.

Instead, it only loads whatever is in your immediate vicinity.

So, if you teleport to a location on the other side of the map, you are instantly transported to the coordinates of that location but must then wait for that location to load in.

This can take a while, up to a minute (My character drowned waiting for one of the interiors of an underwater base to load in.)

If you teleport to a location, don’t be surprised if your game looks like it has crashed. You’ll have to wait a few moments for textures etc. to load in.

So, What Are The Subnautica Console Commands?

Subnautica has a pretty exhaustive list of console commands.

To help you out, we’ve divided them up into sections which you can find below.

There’s a good chance the main reason you’re looking for Subnautica cheats is you are looking for a way to speed run through the game.

After all, a survival game like this can be time-consuming.

Below, you can find all the commands you need to trigger important story events in Subnautica.

Be warned! Spoilers Below.

Maybe you just don’t feel like spending your spare time scavenging for items and messing around with your inventory.

The cheats below should help. They are all aimed at helping with inventory management and spawning whatever you might need.

To use some of these commands, you’ll need the item IDs for the items you wish to spawn.

Next up are the commands that you can use to give your player character a helping hand.

These can be cheats that offer something drastic, like invincibility/ invisibility.

Or, quality of life cheats that speed up game mechanics, eg.  reducing filtration and crafting timers.

These are Subnautica debug console commands. Originally these were mostly used by the developers to change technical parts of the game for testing. Note most of these won’t work on consoles.

Our last batch of codes can all be used to get around the map without relying on vehicles. These are great for zooming around and seeing what the game has in store for you.

Some of these codes require specific IDs for biomes and individual locations. Much like item IDs, there are more of these than we can list. However, you can find an exhaustive list of the biomes here and location IDs here.

Also Read: Stellaris Console Commands to Take Over The Galaxy in 2022

There are a few more Subnautica commands out there, but we’ve focused on sharing ones that you, the player, are likely to find most useful.

Subnautica can be a long, grueling game, so we don’t blame you for wanting to take a shortcut here or there.

Just remember that, as always, the most enjoyable way to play the game is most definitely without cheats.

Also, just remember to back up that save game.

Some of these cheats can be a little unpredictable and we would hate for you to lose progress on your favorite saved game.

How to give yourself items in Subnautica?

Once you’ve opened up the console command window, just type:

So, for example, to spawn 50  titanium just type

How do you spawn the Ghost Leviathan?

All you need to do is enter the crater’s edge (attempt to leave the playable map).

Yes! Nothing in life is free and there’s always a catch.

Before enabling cheats, make sure to save your game. Once you use a cheat, you won’t be able to gain any achievements.