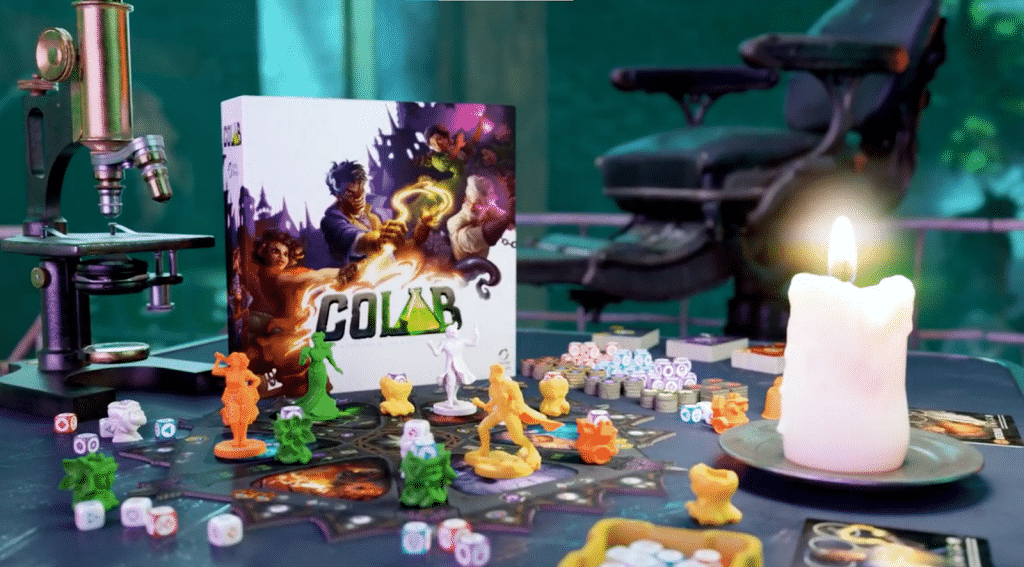 Portal Dragon is Kickstarting the game CoLab which is a mad scientist-themed worker placement board game with a tableau mechanic that is an engine builder but also the main way to earn victory points to win the game.

At the time of writing, Portal Dragon has already reached their funding goal and several stretch goals.

The Kickstarter has until February 8th to reach the last four goals which include upgrading the dice to be transparent and engraved as well as high quality, interlocking pieces to build the lab with.

This isn’t the first time CoLab has gone to Kickstarter, but it will be the last as they made more than quadruple their pledged goal of $30,000 this time!

Back in September of 2021 is when Portal Dragon made their first attempt but canceled only four days after the launch, reaching $21,334 out of their goal of $35,000.

During this launch window of a few days, Portal Dragon was at Gen Con and getting live feedback from fans about CoLab.

Portal Dragon also made connections with manufacturers and other businesses that offered to make Portal Dragon merchandise to go along with their Kickstarter.

After reviewing the feedback and offers given to them, Portal Dragon decided to cancel their first Kickstarter for CoLab. Planning to relaunch later in January to include more stretch goals and add-ons than what they were originally going to do.

Who is Dragon Portal?

Dragon Portal is just two employees, Jon Mietling and Samantha Mietling, a brother and sister team. Jon does all the game design and graphic layout of the products while his sister takes on the accounting and organizational side of running a small business.

Dragon Portal also had the help of Aaron Kluck who has designed games with them since 2014.

Not including CoLab, Dragon Portal has successfully launched four other board and card games. But CoLab is their most funded project to date, passing their previous title, Palm Island, that ended with $99,028 out of their original goal of $4,000.

I can easily see CoLab joining my personal collection.

It’s a game with high replayability based on set-up alone and complex enough to not bore on multiple playthroughs. CoLab also has an inviting and fun theme that makes it easy to introduce to new players.

When compared to other worker placement games with as many moving parts, CoLab is fast and brisk. It says it can be played in 90 minutes, but I can easily see this finishing in an hour once everyone knows the rules.

As a bonus there are even rules for playing the game solo or as a duel between two players, making it easy to find an excuse to bring this game to the table.

With the playtime and evocative theme, CoLab seems like a strong game to play with the whole family. If you can back CoLab while it’s still live, then $45 is a steal for the retail version.

If you missed the Kickstarter, then an MSRP of $60 isn’t too bad either when it ships out to retail stores next year. The expected delivery date for all backers is in January of 2023.