Action RPG is one of the most popular gaming genres around right now. The genre has always been pretty popular but in recent years that popularity has skyrocketed, thanks to games like Dark Souls and The Witcher 3.

The Witcher 3 has seen huge critical and player success since its release back in 2015. There are lots of reasons players flock to RPGs like the Witcher 3.

However, the truth is there is another reason we flock to games like the Witcher. We may not like to admit it but, it’s very much like playing an adult version of dolls.

It’s fun dressing up characters in alternative outfits to see how cool they look. The Witcher 3 is no different.

There are Witcher 3 alternative looks for Geralt, Triss, Ciri, and Yennefer that come as free DLC for the Witcher 3.

Here we have a rundown of what they all are and how to use them.

Of course, we’re starting our Witcher 3 alternative looks comparison with the big man himself, Geralt.

The Witcher 3 has a ton of customization options for Geralt in the base game. Obviously, we’re not going to run through all of them here, it would take forever.

Instead, we’re focusing on the free DLC cosmetic packs that can be used to give Geralt a look not found in the base game.

When a new flagship game is coming out the gaming community often focuses on the strangest, smallest features.

I can remember way back in 2015, I kept reading about how Geralt’s hair grows in real-time during the Witcher 3.

You could cut his hair and beard and within a few, in-game days it would grow back. It’s kinda cool, but more than anything it just means that if you don’t want Geralt to look like an angry Santa you have to take him to the barber pretty frequently.

Geralt’s hair might grow dynamically but in the base game, there weren’t a lot of customization options for his hair.

This all changed with the Beard and Hairstyle Set.

This added an extra four hair and beard styles to the barber menu. Not a huge amount compared to most games in the genre but better than nothing.

Most of Geralt’s alternative looks come from the various DLC armor sets that were released shortly after the game.

They’re all based around different regions of the gems world. They drop at different levels to scale to your Geralt and all look pretty good, especially compared to some of the bland-looking gear you can grab early game.

The first season of the Witcher on Netflix was a huge success, but one thing is for sure, fans really, really hated the look of the show’s Nilfgaardian armor in season 1.

They wanted something closer to the badass look of the armor troops wore in the Witcher 3. Unfortunately, Geralt’s Nilfgaardian armor misses the mark a little.

It doesn’t look bad per se, it’s just a little boring to look at.

It’s all black with some patterning and just a little silver and gold trim. It’s very classy but looks more like formal wear than monster slaying gear. It is also missing the cool little flıurishes that make normal Nilfgaaridan armor so intimidating.

A slight improvement upon the Nilfgaardian armor is the Temerian set.

This armor actually looks a little bit more like something you might actually wear into battle. Unfortunately in-game the armor doesn’t look quite as good as in the image above.

The colors are much darker, making the armor looks a little duller. However, it’s saved by the cool striping.

I’m also a big fan of the brown (leather?) pauldrons and vambraces.  They make Geralt look a bit more action-ready and look like they would suit a Geralt you’ve built to be light on his feet.

Lots of fans love the Skellige set and for good reason.

This armor makes Geralt look like a total badass who’s just wandered straight out of either Skyrim or Game of Thrones.

This is some heavy-duty armor. Seriously, it looks like arrows would bounce straight off of it. And, it is insanely well detailed, even compared to the high standard already set by The Witcher 3.

The Gold patterned plating is beautiful and goes well with the green. The patterning, belt and chest button all give the armor the kind of accents that the Nilfgaardian armor is so lacking.

On my first playthrough of The Witcher 3, it always struck me as odd that Geralt was from the wolf school but there was no wolf school armor set.

We had the Bear, Cat, and Griffin armor sets but no Wolf.

All the Witcher gear looks pretty sick, but my favorite is probably the Wolf armor, especially by the time you get to the mastercrafted version.

It starts off looking like something a biker or rogue would wear and ends up making Geralt look like a medieval biker.

The mixture of metal and leather armor doesn’t just look awesome but actually looks like something a Witcher would wear into battle.

An awesome mix of style and function.

Of course, the Witcher 3 isn’t just a game about Geralt. He also has a kick-ass supporting cast of beautiful ladies.

Triss, Ciri, and Yennefer also got alternative looks as part of The Witcher 3’s post-launch support.

Which ones you like is of course a matter of personal taste, but we’d argue there are two hits a miss here.

So RPGs have an unfortunate reputation for over-sexualizing the armor of female characters. Men get nice protective plate armor and greaves. Women get a piece of breast-shaped tin and a metal mini skirt.

Lots of people find this kind of creepy fanservice problematic and I tend to agree.

Triss is a total badass of a sorceress.

But, her alternative look is pure fan service. It’s clearly just designed to show off the characters’ … assets.

A long flowing dress for a fire sorceress always on the move? I don’t think so. It doesn’t even make sense lore-wise.

Ciri’s look can be a hard one to get right.

Players and book fans have a close relationship with her. She was first introduced as a child and fans have watched her grow up.

So making her look too sexy is just creepy. At the same time, lots of people like to see skin. So Ciri’s default look is pretty iconic and is a hard one to beat.

Not only does it suit Ciri’s personality, but much like Triss’ default look it is functional but still a little sexy.

Thankfully, the developers didn’t go the same route with Ciri’s alternative look as they did with Triss’.

The armor is pretty similar to her default look but with just a little bit more belly on the show and some chainmail covering.

So, oddly the outfit gets bonus points in functionality for the chain mail compared to her default look but loses a few for the crop top belly.

If you want to overthink things the outfit is from a desert area called Zerrikania so the outfit at least makes sense.

Finally, we come to the beautiful Yennefer.

Yenn is known for being sultry. Her default look is sexy, provocative but classy, much like the lady herself.

It would have been very easy for the developers to make the same mistake they did with Triss here and opt for too much skin in Yennefer’s alternative look.

Instead, they went the other way. The alternative look for Yennefer makes her look ready for battle.

It’s light and practical and offers some protection but offers just enough shape and skin to still be sexy. That little tease of her thigh is very Yennefer.

It also keeps to Yenn’s usual color palette of black but adds just a little color through the feathers.

How to Enable the Witcher 3 Alternative Outfits?

All the alternative looks of Witcher 3 were free DLCs so you’ll have to download them first. Once you’ve downloaded them, however, you might be left wondering how to turn them on.

In the case of Geralt just visit any barber to find the DLC haircuts and beards have now been added as options.

For his regional armors, you’ll have to track them down in the world like you would any other armor set.

The wolf set is only the only outlier here. To get your hands on this armor you’ll have to complete a treasure hunt quest, similar to the other Witcher school armor sets.

As you can see there aren’t actually a whole lot of alternative outfits in Witcher 3 right now. Lucky though they’re all free and if you ignore Triss’ they’re all pretty awesome.

Even better, there are some new looks on the way.

To celebrate the success of The Witcher 3 shows on Netflix and the current-gen relaunch of the game it has been announced there will be brand new Witcher 3 DLC launching at some point in 2022. We’ll be sharing the latest on that pretty soon!

The DLC will include brand new cosmetics and skins inspired by the design of the show. A Geralt that looks like Henry Cavill? 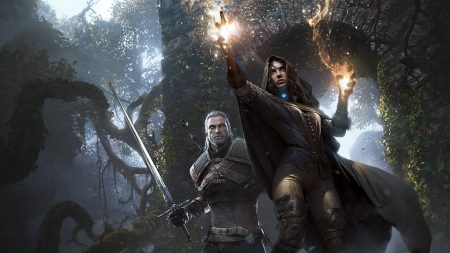